Today’s Message: “Breathe on Me, Breath of God: 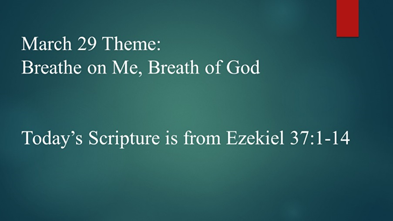 Today’s message on the theme "Breathe on Me, Breath of God" is presented by Roger Parrish.

But first, I want to start with a Parish family history story.

My 4th great grandfather born in 1736 was farming in coastal Connecticut in 1765. His family then included his wife Mary and 3 children. His family with 5 other families seeking a better life opportunity joined in a settlement in what is now Strafford, Vermont; incidentally just 12 miles from where Joseph Smith was born later. The land was acquired from a then Province of New York, as this was unsettled land between New York and New Hampshire. The families spent 3 years making trips back and forth to clear enough land to start farming. After 1770 three more children were born in Vermont including my 3rd great grandfather, Eliada.

In the meantime, New Hampshire sold rights in Strafford often to the same land and conflict arose as to land ownership. The dispute was settled by the Crown ruling in favor of the New York grants. Later, the early New York grantees were in the minority and with the beginnings of the Revolution, and the New Hampshire militia, led by Ethan Allen, those New York grantees were labeled enemies and pushed off their lands. Any Canadians here will recognize the label given them, Loyalists. Identity politics is not new, only its label. Mary’s father was an earlier settler and the family went to live with him.

My 4th great grandfather was stripped of his hard-cleared virgin land, his ability to support a family was lost, his country was in turmoil, and the future looked bleak. I’ll finish this story later, but first, I want to get back the Scripture message for today taken from the book of Ezekiel in the Old Testament.

The prophet Ezekiel lived during the time of the Babylonian conquest in the 5th century BC. He ministered to the people during the siege of Jerusalem and after Jerusalem and the temple was destroyed. The people including its leaders, artisans, and wealthy people were taken captive and lived in exile in Babylon to serve the Babylonian king. The Jewish king was captive in a foreign land. God’s promise to give the Israelites their land for all time seemed empty. The temple, the dwelling place of God, lay in ruins. The Israelites no longer had a national identity. It seemed that God had deserted them.

The Book of Ezekiel is the third of the Latter Prophets in the Hebrew Bible and one of the major prophetic books in the Old Testament following Isaiah and Jeremiah. According to the book itself, it records six visions of the prophet Ezekiel, while exiled in Babylon. Two are well known from spirituals – “Ezekiel saw that wheel Way up in the middle of the air” and the one in today’s Scripture reading – “Ezekiel connected “dem dry bones.” As spirituals they were teaching aids.

Under the spirit, Ezekiel was brought into a valley full of a very large number of very dry bones. God asks Ezekiel if these bones could live again. Ezekiel responds, “Lord God, You know.” God asks Ezekiel to prophesy to the bones saying “O dry bones, hear the word of the Lord! Surely God will cause breath to enter you and you shall live, He will put sinews and flesh on you and cover with skin and put breath in you, and you will know I am the Lord.”

Then came the interpretation after the 11th verse. The bones are the whole house of Israel. Its people are like bones that are dry, all hope is lost, and they have been cut off and isolated. Then God says he will open the graves and cause the Israelites to come forth and then He will bring you into the land of Israel.

This prophesy harkens back to Genesis where all creation is assigned to God’s power. What could be more powerful than the creation of life? Returning the Israelites to their homeland should be a piece of cake by comparison. It’s to remind them that they were not abandoned and to have faith. Later in the chapter 37 we find:

Ezekiel’s vision of the valley of dry bones came to him after God had directed him to prophesy of the rebirth of Israel in chapter 36. God announced, through the prophet, that Israel will be restored to her land in blessing under the leadership of “David, My servant [who] shall be king over them” (Ezekiel 37:24), many believe this is a clear a reference to the future under Jesus Christ the Messiah, descendant of David (Isaiah 7:14; 9:6–7; Luke 1:31–33).

It seems the Jewish peoples have been constantly maligned in their history. Held captive in Egypt until lead out by Moses. Their nation and temple destroyed by the Babylonians holding them captive in a foreign land, then at the time of Jesus as they were occupied by the Romans, later German Jews were persecuted and imprisoned in concentration camps in our life time.

For everyone today, Ezekiel’s prophesy shows that with faith, blessings to help overcome obstacles in our lives can become a reality.

Now, as promised, I will conclude my brief history of my 4th great grandfather. As we left the story, Loyalists have been driven off their pioneered lands in what is now Vermont. He lost his land and all the work that went into it clearing it for farming, and everything else, but Mary, his wife, was able to move with her then 6 children in with her father living nearby. So why did I use this family history here? You see my 4th great grandfather’s name was Ezekiel Parish. He felt the same kind of loss as the biblical prophet Ezekiel being in captivity and removed from his native land. He lost his farm, he was separated from his family, he lost what he thought was his country.

So, what did Ezekiel Parish do? He saw no way possible to recover his loss unless the British could quell the revolution. He was not a prophet like the biblical Ezekiel. He was nearly 40 years old and could not join as an active soldier but knowing the area he could become a scout. He was eventually captured by the Continental army and imprisoned, nearly starved and treated harshly. He finally escaped and fled to Canada where he died in his 50’s in Halifax separated from his family forever.

Mary stayed in Vermont never losing faith that their hard-earned land might be returned. Vermont became an independent republic first and then acquired statehood. Mary continued to press the injustice of losing the land and along with other Loyalists who lost their lands, eventually was rewarded with compensation.

Because of Ezekiel’s service to the British, Mary and each of the children were awarded 200 acres of land in Ontario (north of Brockville). There the grown children started a new pioneer experience with lands to clear for farming. After 1850, Elida’s son Ira and brother Hiram were living in Lee County, Iowa across the river from Nauvoo. After the church split, Hiram and his family went to Utah and Ira stayed and later joined the Reorganized Church of Jesus Christ of Latter Day Saints. Then the spelling of the family name was changed to Parrish to distinguish themselves from the Mormon family who retained the original spelling, Parish.

This entry was posted in Uncategorized. Bookmark the permalink.

1 Response to Today’s Message: “Breathe on Me, Breath of God: